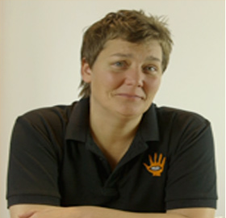 Reading Operatic Society is delighted to announce that Stacey Stockwell of disability awareness training company Beans Training will be providing a sign language interpreted performance of Oliver! on Friday 26 September 2014.

Stacey was widely praised and acknowledged for the way in which she stood in a spotlight to one side of the Hexagon stage for the Reading Operatic Society performance of Grease in 2013 and interpreted every song and moment of dialogue. No small feat when your back is to the action and your face towards the audience. With proven abilities interpreting bands, solo artists and theatre companies throughout the country Stacey is used to this kind of challenge and we’re delighted she has once again chosen to work with us this year, assisting Reading Operatic Society’s aim of bring musical theatre throughout Berkshire to the widest possible audience.

During the day Stacey is often working her own audience when delivering disability awareness training and audits for companies and their employees. Her work covers a broad spectrum including disability, mental health, dementia, visual and hearing impairment. You can read more and view explanatory videos at www.beanstraining.com 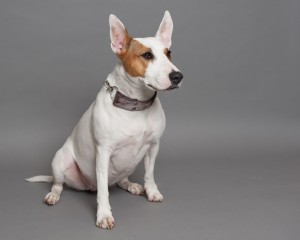 The run up to Reading Operatic Society’s performance of Oliver! at The Hexagon in Reading, Berkshire, is proving busy for all members of the cast. Not least the female actor playing Bulls Eye who is neatly reversing a long tradition in the theatre by being a woman playing a man’s role.

We caught up with Kiara in a recent break between walks. Here she explains what is involved in taking a starring role in Oliver! – Lionel Bart’s famous musical

“Whilst my stage name is Bulls Eye my real name is Kiara and I am six years old and this will be my first time on stage (encouraged by Corinna Bartle who is also in the show). I also live harmoniously with some step-brothers and sisters; two cats, two rabbits and a tortoise!

“I was very excited to accept the role after being auditioned by Director Matt Whitelock and the cast to see if I could take directions and not bite or growl when annoyed. Whilst I may find it a little stressful initially, with all the noises from the band and the strange lighting, I promise not to suffer stage fright but I hope the two poodles who are also appearing will not up stage me with their good looks and grooming. Okay, I know I am not a pretty dog but I do have a lovely personality and will get on well with everyone.

“Am I a show off? Well, what girl doesn’t respond to a little fuss and attention? I am practicing the ‘walk ‘ when I go out for my daily stroll but will probably have to take acting lessons on how to look fearsome (I am relying on Richard Bott who is playing Bill Sykes to show me how to engage with the audience and look menacing. I’m told that Richard will look after me and give me nice carrot sticks if I am a good girl).

“Playing a male role does not concern me – Bulls Eye could be a unisex name, but I am not too happy about being kept backstage in my cage away from the cast just in case they might give me treats. They have to be frightened of me so it might be a little lonely between scenes. I am going to be supplied with a special costume –red and white spotted scarf that the costume lady promises it will fit perfectly – whoopee!

“I know that I have to be careful with my toilet habits and undertake not to have more little accidents as I did when I heard I had got the role (that can be excused as excitement ). As an English Bull Terrier I have always been taught to behave with impeccable good manners.

“I am interested to see that Stacey will be Signing for the Deaf at Friday’s performance but I promise to ignore any signs that might look like ‘come here –good girl.

“Because I am a quick learner, Matt says he expects and hopes I will receive a wonderful round of ‘a paws’ at the end of the show!”

Auditions attracted a very large number of adults and children all vying to be a part of Reading Operatic Society’s production of Oliver! which will run from 24-27 September at The Hexagon theatre, Reading, Berkshire.

Director Matt Whitelock was bowled away by the quality. “Wow! What an incredible set of auditions for Oliver!” he stated. “From over 60 children that auditioned, 30 strong young people have been cast in the younger roles. I personally saw some performing last night in Starmaker’s production of 13 (currently at the Wilde Theatre Bracknell this week) and can say they sure do know how to work the stage.

“It was also great to see so many adults interested in the production as well, Matt continues. “The pre-audition workshops were a fun way to get to know each other and hear about the vision of the show. We have some real talent treading the boards in the principal roles and understudies are primed for the Saturday matinee if they work at their roles too. With a few numbers already blocked and ideas flowing for the show Oliver! promises to be a real great piece of theatre for Reading.” 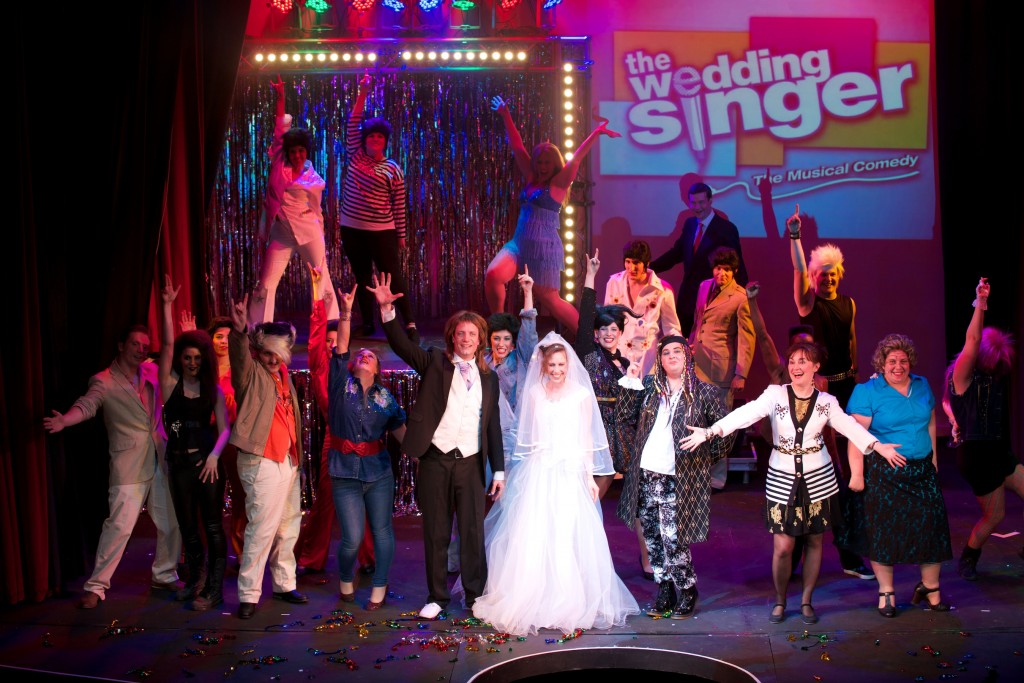 After months of preparation the cast and crew unleashed the full force of The Wedding Singer at The Kenton Theatre, Henley-on-Thames last night.

The Kenton might be Britain’s fourth oldest working theatre but there’s nothing old-fashioned about this performance, with more than 200 costumes, loads of 1980s-style props, a complex digital sound system and an enhanced lighting rig. The cast have been doing full runs of the show for nearly a month now and the result was a brilliantly well received first night performance, which reflected well on all the efforts.

Tickets are still  available for some performances – visit our Wedding Singer page for more information.

Are you aged from eight upwards and would like to perform at Berkshire’s number one touring venue, The Hexagon?

Reading Operatic Society is looking for talented boys, girls, students and adults (singers, dancers and actors) who would like to take part in its next production – Oliver! on 24-27 September 2014.

The adult process will commence with a workshop on Thursday 24 April and Monday 28 April at St Peter’s Church Hall, Earley, Reading.

The adult auditions will be held on Thursday 1 May from 19.30pm-22.30 at the same venue. Songs, music and libretto pages will be available prior to auditions.

Rehearsals for successful adults will be on Monday and Thursday evenings 7.30pm-10.30pm as called, plus some Sundays.

You will need to read and complete an adult audition form which can be downloaded by clicking here. There will be a £5 audition fee payable at the start of the audition. Please complete the form and send it to secretary@readingops.co.uk

The youth audition for those aged 8-18 will be held at St Peter’s Church Hall, Earley, Reading on Sunday 27 April from 1.30pm-5.30pm. It will be workshop based and you will spend time dancing, singing and acting.

Rehearsals for successful children will be Sunday afternoons 2pm-5pm through May, June, July and September with some Monday and Thursday evenings during those months at times to be confirmed.

Reading Operatic Society is pleased to announce that it will be performing Oliver!, Lionel Bart’s highly popular musical, at The Hexagon Theatre, Reading, Berkshire on 24-27 September 2014.

This musical adaption of Charles Dickens’ Oliver Twist has been filling theatres since it was first performed in 1960 with the most recent London revival lasting three years until 2011.

The Reading Operatic Society production will be directed by Matt Whitelock, a professional actor and acting coach who is also principal of Berzerk Productions in Reading. Casting will be held later in the year; further details will be published on this website and our Facebook page. 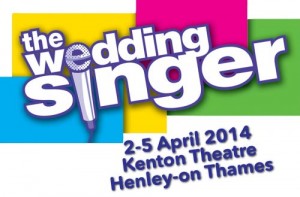 Reading Operatic Society is pleased to announce the cast of The Wedding Singer after a very high quality audition.

Rehearsals are now underway and The Wedding Singer will be performed at The Kenton Theatre, Henley-on-Thames. Further details here.

It’s great to see the following news item on the Reading Chronicle in support of our forthcoming production of Grease.

Music and theatre lovers have the chance to pull out their leather jackets and turn-up jeans when one of the most popular musicals of all time comes to Reading.

The Reading Operatic Society will perform the 1970s hit Grease at the Hexagon, in Queen’s Walk, from Wednesday to Friday, September 28, starting at 7.30pm.

The society’s chairwoman, Yvonne Maynard, said: “It’s going to be fabulous. Everyone has put in 120% at rehearsals – we have a great bunch of kids.
“It should be a very good show and sales have increased after the success
of Footloose.”

The show will be raising money for Deafblind UK and the learning disability charity Mencap, with audiences given a chance to donate before and after each performance.

Tickets are £18, and £16 for concessions, for each night. Keep the music going with a rock ‘n roll after-show party on Friday at the venue, with a buffet and disco. Party tickets cost £12. To find out more, visit www.readingops.co.uk and for tickets call the Hexagon on 0118 960 6060.

The society is always looking for new members and auditions for the next production, The Wedding Singer, are in November 2013.

Great news in The Henley Standard. It turns out that Reading Operatic Society can banish the blues by bringing Footloose to The Kenton Theatre.

Mary Williams’ spur of the moment decision to make a “rash purchase” of a ticket to see the show on Saturday night resulted in her being delighted.

“The youthful cast were a joy to watch, especially Sam Pemberton for his comedy timing, Charlotte Gilliam for her cute quirkiness, James Gwynne for his powerful singing and acting and Jerome Ifill whose dancing ability was outstanding.

“I have not been a frequent theatre-goer before but if shows like this are at the Kenton regularly I will certainly be back.

“Thank you for a wonderful evening Reading Operatic, I feel much better now!”

Reading Operatic Society is a member of NODA