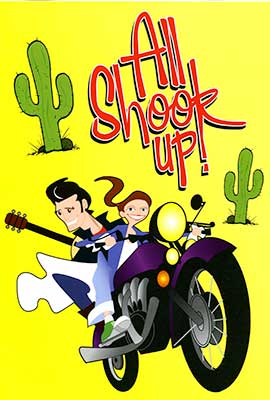 Reading Operatic performed All Shook Up, a jukebox-style musical, on 20-24 September 2011 at The Hexagon, Reading.

Featuring Elvis Presley songs and loosely based on Shakespeare’s Twelfth Night, with book by Joe DiPietro, All Shook Up was first premiered on Broadway in 2005, making it one of the youngest musicals ever to be performed by ROS. Staging in our production was modern with steel decking and projected scenes, quite a departure for the society. The props list unsurprisingly included a full-size motorcycle.

NODA review of All Shook Up

Click on an image to see it at a larger size